I’m dedicating my blog time to my favourite crisp finds and the locations where wonderful crisps can be found!

I’m going to start with a recent crisp find at an Off Licence on Clarendon Park Road, Leicester.

They are Bobby’s Beef Grills and they are most definitely the right amount of beefy!!

If you spy these crisps, pick up a bag and taste the extreme beefy flavour! 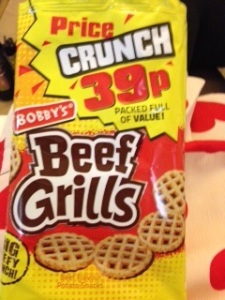 Netflix is taking over my TV life. I have spent hours and hours going through so many great shows.

My current recommendation is 3rd Rock from the Sun.

A great flashback to the fantastic 90’s era!

We’re talking a very youthful Joseph Gordon Levitt in his infancy, cameos by Roseanne and Dennis Rodman and the best fashion statements!

I even noticed Jerry Girgich (Parks and Rec) making an appearance in season 2 episode 10!

If you have an evening on your hands, why not get on your sofa and put netflix on!

Whoah what a night! The excitement for seeing another Tom Vek show was high! After his long hiatus, any opportunity to catch him was too hard to turn down. Coming off the back of releasing his third, yes third album, the show was sure to be filled with fresh new tracks as well as hopefully treading or more like dancing over old territory.

Following the passing of the cockpit (RIP), the gig was at the Wardrobe. A venue on the outskirts of town that was buzzing with people as soon as we entered. Fun adults were playing their support slot. They were channeling their love of Wild beasts with every falsetto note sung. It was an interesting support slot that seemed to prove challenging for some of the audience to stand. It was a mellow sound that had hints of pace and movement.

As soon as they finished, the stage was set for the Vek. From listening to new album ‘Luck’, it was no surprise he started with album opener ‘how am I meant to know?’. A track which eases you in a soft pace into the album and the gig with Vek’s signature vocals repeating the title over to a layering of the bands sounds. This was a start of something special.

He moved through the set list leaving little time to breath between each song. He captured the greats from the first two albums. ‘CC’, ‘Ain’t saying my goodbyes’ and ‘aroused’ enraptured many of the crowd, bringing out the most movement of the night.

Vek was as effortlessly calm and collected as you’d expect but you could see hints of his pure jubilation at the crowd when his words were being sung back at him. The fun had on stage mirrored the amount of fun I was having, especially when they free styled salt n pepas ‘push it’ on the end of ‘pushing your luck’.

The most soulful part of the night was when Vek played the somber track ‘The girl you wouldn’t leave for any other girl’. Such simplistic yet deep lyrics that were so emotionally piercing when Vek sings it live. Only downside was the rudeness of a lot of crowd members who wanted to chat rather than listen to the artist they’d paid to see. Symptomatic of gig going at the moment unfortunately.

If you’re thinking of buying a ticket for his tour but haven’t done yet, do so. You’ll be kicking yourself if you miss out on this artist while he’s still playing and not on a hiatus. Never stop making music Tom Vek. The world would be a less dancey place.

At the moment there are a couple of movements that I feel very passionate about.

1. No More Page 3
It’s been getting a lot of coverage recently and hopefully that means the start of change occurring.

Newspapers should report the news not naked women. Women should be given the same respect as men.

2. Don’t stop the music
Channel 4 are supporting the movement to make music more accessible to children at school. You can donate a musical instrument at oxfam.

To find out how visit http://www.oxfam.org.uk/get-involved/oxfam-music

This week has been filled with lots to get the mind and body working.

My top TV this week:
1. Orphan Black: The Prolethians are literally everywhere. They’ve got close to Mrs S and looks like they’re set to make Helena even more crazy than she already is! Cant wait till next Wednesdays episode.

2. Big Bang Theory: The ShAmy kiss had me all shook up! Cant beat the romantic moments in BBT. I’ll never understand how people think it isn’t funny!
3. Brooklyn Nine Nine: Absolute genius comedy show about cops! Chelsea Peretti is by far the best character! It’s back for a second season. Thank goodness there’s still loads of episodes left in season 1.

Best article:
I read a great piece on the Guardian which brought to my attention that Mother’s arent on the marriage certificate. Only your fathers name and occupation gets written on it. I find it so unbelievable that the woman who went through the pain of giving birth to you doesnt get any formal recognition of their contribution towards one of your important life moments. Sign the petition and lets give mothers the equal part in your marriage!
http://http://www.theguardian.com/commentisfree/2014/may/08/mums-marriage-certificates-wedded-inequality?CMP=fb_gu

Best event:
Night out of the weekend goes to Greg Wilson at Distrikt! I saw him do a chin wag at Outlaws yacht club the night before which was amazing! His musings on the hacienda from its peak to its lowest lows and his passion for music is inspiring! Watching him DJ is completely unreel!!

Best online shop:
My favourite website of this week is living in lalaland. They have the greatest amount of TV related jewellery, pencils and artwork and i want all of it! One of my favourites is their doctor who pencils!

As an attempt to improve my writing skills, i’m starting a blog. I’m not saying it will be interesting but i’m hopeful of using it to formulate my opinions in writing on everything and anything I feel is important to me.

“Consistency is the last refuge of the unimaginative” Oscar Wilde